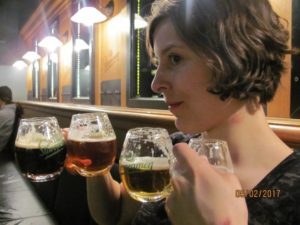 “I don’t drink beer” said my coworker as we reminisced about the escapades of the previous weekend.

This is a claim I’ve heard every now and then, but the first thing that pops into my head is that the statement “I don’t like the flavour of beer” might as well be “I don’t like the flavor of food”. It shows an innocent naivety that a person has only ever had bread, and been unaware that pizza, brisket, and butternut squash exist.

I’ll admit it: the first time I drank a good craft beer, I felt as though I’d been lied to all my life. Previously, I’d associated ‘beer’ with the stale smell of cheap macro lager cans littering university student housing. I had never imagined that the simple category of ‘beer’ could have such a wide-reaching diversity of flavour. To me, lumping a tart, fruity, red wine-like Flanders Red Ale, a crisp, yeasty Weissbier, and a deep, soulful Stout under the generic label of ‘beer’ is almost a crime. It puts up a blockade against everyone who has been betrayed by a bad bottle and bars them from venturing into a pint that might be more up their alley. There is a universe of flavour available that runs the flavour gamut of sweet, salty, sour, bitter, and savory.

Then, you must consider mouthfeel! Do you prefer your beer to quickly pass your lips, leaving a gentle hint of flavour? Or do you want your tongue to experience a gentle hug as a milkshake IPA dances around it? I’ll never forget when I sampled Last Best’s Nitro Latte Ale. The tiny nitro bubbles immediately summoned a sensation of Cappuccino foam! That was two years ago and I still remember how it tasted and felt. Mmm. Delicious memories.

When I hear someone say that they don’t like the flavour of beer, I try to discern what style would suit them. What was it exactly that they disliked? If they drink wine or other spirits, what flavours do they look for in those drinks? Finding similar flavours between other things they’ve enjoyed helps to identify what beers they might like. The founders of Analog Brewing and I brainstormed a few good transition drinks:

Do you remember your first beer? Or, the first beer that you truly enjoyed? Did you always love beer, or did you have to find the right style? Tell us your stories!