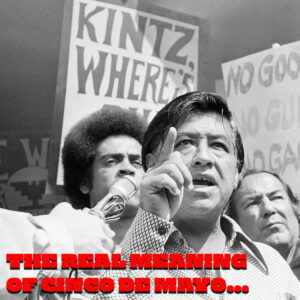 What is Cinco de Mayo? It’s not a trick question I promise. First of all, it is not Mexican Independence Day (that would be September 16th). So, if not a celebration of Mexican freedom what is it? Many people do not know. And to different people it means different things. In Mexico at large it is simply May the 5th. In the state of Puebla, it is an anniversary of when the natives of Mexico defeated the military forces of Napoleon III (even if only briefly, I’ll get to that shortly). In the United States and Canada it’s largely a commercial holiday like Valentine’s Day or St. Patrick’s Day. That is not to say it is a holiday void of any meaning and in fact, to me, it holds a special significance.

A Very Brief History of Mexico and Cinco de Mayo

I’ll spare you the entire history of Mexico as I am not qualified to summarize it and it deserves a far more expansive explanation than I have room to give it within this post but in the late 1850’s Mexico was undergoing a Civil War. At the conclusion of this civil war Benito Juarez became President of Mexico. Following the Civil War the Mexican economy was in very poor shape and President Juarez declared that Mexico would not be honouring its foreign debts leading to the very predictable reaction of being invaded by the nations it owed debts to: England, Spain and France. France was being led by Napoleon III who was using this debt crisis as an excuse to rebuild the French Empire within the Western world since his uncle Napoleon (the one you probably assume is really short) had sold Louisiana to the United States and Quebec had become part of British North America. It was during this invasion by France that the battle of Puebla occurred. May 5th 1862 the army of Puebla stood their ground and won a decisive victory against the French Empire. This victory was short lived, however, as the French regrouped and attacked Puebla again on the 17th and won this time and continued on until all of Mexico was under the control of France. Thus the first Cinco de Mayo became a regional celebration within the Mexican State of Puebla.

America and Mexico have always had an intertwined history. A large portion of the United States used to be Mexico after all. California, Arizona, Nevada, Utah, Texas, New Mexico (duh) all were a part of Mexico before becoming American states. Again, a lot of history that is very interesting but is not the point of this post so I will digress. California is where I will focus this story and soon that will become apparent why.

In 1862 when word of the victory in Puebla over the French Empire reached California the state, which was involved in it’s own civil war at the time against the Confederate States, celebrated the victory as a victory for the defence of liberty![1] Fast forward 70 years and we get to the 1930s. By the 1930’s many people throughout the American Southwest were a part of the “Mexican-American” community. Proud of their new nation as well as their Latino/a heritage. In spite of the Great Depression still underway Mexican-Americans began to use Cinco de Mayo as a way to promote and protect their community and culture in the American Southwest.[2] By the 1940’s the United States had entered the 2nd World War, Mexican-Americans joined to fight for their new nation beside their neighbours. Much like African-American soldiers who returned home following the war Latino’s may have fought for an ideal but that ideal was not what was waiting for them at home.

To interject a little personal history into this post if I may, my great Uncle Joe was one such soldier. My paternal grandmother’s family moved from Mexico to the United States in pursuit of the American dream. When war was declared my grandmother’s brothers volunteered to fight for their new nation. Joe fought and died on D-Day.

By the 1960’s the American civil rights movement was in full swing. You likely know the names Malcom X and Dr. Martin Luther King Jr, but do you know Cesar Chavez? Cesar Chavez was a labour organizer and civil rights leader in California striving for many of the same goals Malcom X and Dr King: fairness in housing, employment, wages and other parts of American life.[3] Cinco de Mayo became an annual rallying cry amongst the Chincano movement demanding justice and equality. It was at this time that my father was growing up in California.

If you have been in the Analog taproom there’s a good chance you have met my Dad: Tyrone. He has a big personality (I guess I know where I get that from), he likes to meet strangers, make new friends and tell them stories of how Analog started. He loves to show off the canning line and tell stories of the early days when he came in and helped get it working properly. Or about the long nights he and my Mom helped with labelling. Or how proud he is of me and Bryan for accomplishing what we have accomplished so far. He grew up in a California that had Cinco de Mayo celebrations as part of life. The community, the celebrations, the music, the food, the people. Throughout the 1960’s and 1970’s Latino/a civil rights leaders continued to make Cinco de Mayo a part of the lives of Americans in states with a large Latino/a community.

In 1969 Latinos were still being denied equal employment by a large brewing corporation based out of Colorado. (I won’t say which one.) Leader’s of the Chicano movement orchestrated a boycott of all their products as well as the bars that poured them. By 1984 the Colorado brewery had had enough and ended their exclusion of Latino-American’s within the workforce and agreed to greater the $300 Million in funding for Latino organizations.[4] Desperate to turn the page on this part of their corporate history (as well as to reclaim the 26% market share of beer sales they had lost during the 15 year battle) a new ad campaign was born bringing Cinco de Mayo nationwide thanks to your friendly, neighbourhood, Colorado Brewery.

What Does Cinco de Mayo Mean to Me?

It was also around the time that Cinco de Mayo became a nationwide celebration in the United States that my father, like his grandparents before him, became an immigrant; moving to Canada to pursue that better life for himself and, eventually, his children. I was born here in Edmonton, as was my brother. My Mom in Quebec (even if I lie and say Saskatchewan most of the time). But we were always aware of our ties to Mexico. My Mother learned to make the 3rd best tacos in the city (only behind 3 Amigos and Bryan’s Mom) and it was a little taste of home for my Dad. For me, when I moved out on my own the first Cinco de Mayo I had in my own house was a celebration. I made tacos, enchiladas, fried corn and a few too many margaritas. It was a celebration of what I had accomplished but it was also a celebration of where my family has come from.

Being born in Edmonton in the mid 80s and growing up here I never knew the history of the Chicano Civil Rights movement until I went to college. Even then it was largely me doing my own research as it interested me and it let me connect with some of my family who I rarely met (my Grandmother Bertha for example) or will never meet (like my Great Uncle Joe). When Bryan and I opened Analog we wanted to celebrate who we are and I feel our personality comes through in most everything we do. We are nerds. We like video games, and comic books, and dungeons and dragons, and old cartoons, and great beer. We want to celebrate our Mexican heritage so we make our Porter Fandango every September as a way to celebrate Mexican Independence Day. This year we are making our Chocolate Churro Milk Stout to celebrate Cinco de Mayo. We partnered with Sandy Lane Liquor and The Three Amigos Restaurant to bring the celebration to more people in Edmonton.

Maybe Cinco de Mayo started as a regional holiday in Puebla, maybe it was a civil rights event in the southwest, maybe it became over commercialized in the 80s. Maybe all of that is true, but, to me, Cinco de Mayo is how I celebrate all of my roots. Be they Mexican, Canadian, American, Indigenous, or anything else. The paternal side of my family moved from Mexico to America to Canada in three generations bringing this tradition along with them. Celebrating our past while striving to build a better future. Let’s raise a glass and celebrate together.